This event has already passed. 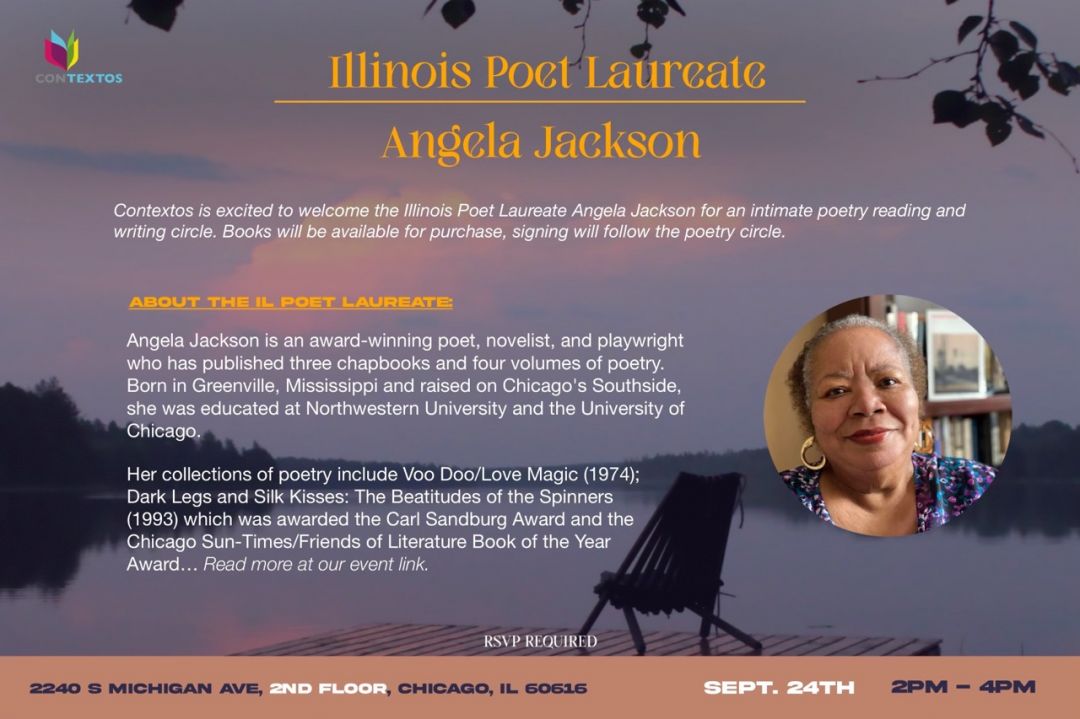 Details
Contextos is excited to welcome the Illinois Poet Laureate Angela Jackson for an intimate poetry reading and writing circle. Books will be available for purchase, signing will follow the poetry circle.


About the IL Poet Laureate:
Angela Jackson is an award-winning poet, novelist, and playwright who has published three chapbooks and four volumes of poetry. Born in Greenville, Mississippi and raised on Chicago's Southside, she was educated at Northwestern University and the University of Chicago.

Her collections of poetry include Voo Doo/Love Magic (1974); Dark Legs and Silk Kisses: The Beatitudes of the Spinners (1993) which was awarded the Carl Sandburg Award and the Chicago Sun-Times/Friends of Literature Book of the Year Award; And All These Roads Be Luminous: Poems Selected and New (1998), nominated for the National Book Award, and It Seems Like a Mighty Long Time (2015) that was nominated for the Pulitzer Prize, the Pen/Open Book Award, finalist for the Hurston/Wright Legacy Award, and a finalist for the Milt Kessler Poetry Prize. She received a Pushcart Prize and an American Book Award for Solo in the Boxcar Third Floor E (1985). Jackson has a forthcoming poetry project due in 2021.

Jackson has also written several plays, including Witness! (1978), Shango Diaspora: An African American Myth of Womanhood and Love (1980), and Comfort Stew (2019). Her first novel, Where I Must Go (2009), won the American Book Award. Its highly anticipated sequel, Roads, Where There Are No Roads (2017), won the 2018 John Gardner Fiction prize. She is also the author of the significant biography A Surprised Queenhood in the New Black Sun: The Life and Legacy of Gwendolyn Brooks.

She has received the Shelley Memorial Award of the Poetry Society of America, TriQuarterly’s Daniel Curley Award, Illinois Center for the Book Heritage Award, Chicago Literary Hall of Fame Fuller Award, Literary Hall of Fame for Writers of African Descent from Chicago State University, the Academy of American Poets Prize, and grants and fellowships from the National Endowment for the Arts and the Illinois Arts Council. She was a twenty-year member of the Organization of Black American Culture (OBAC) Writers Workshop, succeeding the late Hoyt W. Fuller as its Chair.

All items are non-refundable, all sales are final.

All items are non-refundable under any circumstances.